Home Empowerment Why Join Steemit? 9 Advantages of Getting in Today! 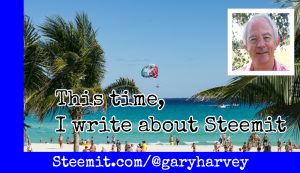 Imagine a social media platform that PAYS YOU for posting.

How would you tell your friends the BENEFITS of getting involved with Steemit?

Here, let me give you a list of reasons why your friends might want to join Steemit. It’s a list of the benefits and advantages I, a newcomer here, already see in Steemit.

It’s like Facebook except you GET PAID for posting and “liking” (except here we call it upvoting).

No ads! No sponsored posts. Isn’t that great? Your Facebook is sometimes filled with ads for stuff you don’t want to see. Not here. Which also means…

3: No Zuckerbergs getting rich at your expense

Or anybody else. Everyone gets paid according to their contribution.

There’s an exciting vibe at Steemit. It has the feeling of pioneers growing something remarkable. I haven’t experienced that at other social media sites, and other members say the same thing.

Blockchain is a distributed database that is transparent and tamper-proof. Here’s how that works, in simple terms:

“A distributed database. Picture a spreadsheet that is duplicated thousands of times across a network of computers. Then imagine that this network is designed to regularly update this spreadsheet and you have a basic understanding of the blockchain.
Information held on a blockchain exists as a shared — and continually reconciled — database. This is a way of using the network that has obvious benefits. The blockchain database isn’t stored in any single location, meaning the records it keeps are truly public and easily verifiable. No centralized version of this information exists for a hacker to corrupt. Hosted by millions of computers simultaneously, its data is accessible to anyone on the internet. The code is open source which means nobody (and no corporation) owns the code.” [Source]

Because of the coding system that undergirds Steemit, everything is open and visible. Whether you’re a minnow (a newbie) or a whale (someone with a lot of value in the system), your every action is recorded and open for inspection by anybody. That’s transparency for you. If someone does something crooked, there’s no hiding it. Ever.

There was a conscious effort by the programmers to make it fair for everybody — and there are people constantly working to keep it fair. Every now and then, it’s been tweaked to make it more fair — especially when it’s discovered that some clever chaps have found a way to game the system.

The day you join, the system gives you 25 “reputation points.” If you post rubbish and make empty comments (like “great post” or “COOL!”), others will downvote you and your 25 will reduce. If your reputation gets too low, the system devalues your account. Not sure of the details but this I do know — the system is designed to reward quality contributions.

Steemit was launched mid 2016. And the early days are always the best time to get in. Compared to the 2.13 billion active users on Facebook, the 700K accounts in Steemit is tiny. And not all those are active members.

With all this going for it, and its current rate of growth, some members expect Steemit to outgrow Facebook over time.

And to be candid, some critics expect it to fail. We’ll just have to see about that, but since the only thing it costs to participate is your time, I’m in, boots and all. You?

So, how much can you make?

Profits are shared with those who help to create the value. You earn in cryptocurrency which can be exchanged for “real money” such as US dollars.

As I first-draft this, here are the top 7 posts on the Trending/promo-steem page. It will give you an idea about potential earnings. These are posts by users who are keen to grow Steemit and their own accounts in Steemit.

Now, if we go to the overall Trending page, the earnings figures are bigger. Much bigger. Here are the top 5.

By the time you read this, these figures will have changed but the general pattern should be similar, the pattern being that people are making a lot of money with this social media platform.

Be advised. It’s quite different to anything I’ve known before, so it’s been a learning curve. And there will be also a learning curve for you. However… Steemit has attracted a supportive community and if you ask questions, odds are you’ll get answers, help and encouragement. I certainly have.

Steemit is an exciting opportunity. Participating will cost you nothing but your time, and it could make you a nice chunk of cash. Get actively involved. And spread the word.

Acknowledgement: I am reposting the above content. It was originally published at https://steemit.com/promo-steem/@garyharvey/why-join-steemit-9-advantages-of-getting-in-today about 2 months ago. I would have used the re-steem feature, but it appears that feautre only works for posts less than a week old.

Thanks for reading, I would like to hear your reason if I haven’t mentioned it yet.

Why Join Steemit posts
We are the Love of God, no matter what.
Share this
0 likes
Related Articles
0 Comments