A DIFFERENT MEASURE FOR WEALTH 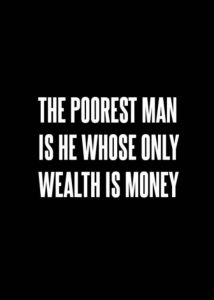 There are other factors as well.
If I have friends who are willing and able to give me money or do favors for me when I ask, that contributes to my wealth, my potential to create activity.
If I am a motivational speaker or other performer, I can inspire powerful emotions which may translate into activity.
If I have employees or partners who will do what I ask, this also increases my ability to become dynamic.
If I have strong fiduciary power, I can convince bank loan agents and investors to loan me money and thus generate massive financial activity.
To measure the quantity and speed of money, I have invented the term “momentum of money.”  In my opinion, this idea helps give a better picture of wealth.

THE ORIGIN OF MONEY

In case you did not believe me when I told you above that money is an idea, I will tell you a basic history of money.

Exchange originated in the form of bartering.  As fortunes grew, it was agreed to give value arbitrarily to objects that were found only in small quantities.  The objects that grew to predominance were precious metals, with gold becoming the standard.  When voyagers traveled long distances to deliver gold, they found it safer to leave the gold in a safe place and carry instead a promissory note which represented the gold.  The recipient of the note could then pick up the gold later.  For a while, all money was backed by gold which was kept in storage.  The gold in storage served as collateral.  This gave the notes (paper money) intrinsic value.  During that time, the number of notes that a government printed was limited by the amount of gold they had in storage.

I wrote this article years ago, and I published it back then. As I read that article now, I’m surprised to see the awareness and wisdom that I had back then. Combined with that idea, it is important to understand that I have grown my net worth by mulitples since then, and that I have helped many people in the process. I now have a sense that I am becoming better and better positioned to expand greatly on my past achievements and contributions. I’m motivated now to re-publish this article as a means to get these ideas out to more people. I’m on a mission to empower people to make better choices.