What would you do if you found yourself in a situation like this?

Imagine you were in a scenario like this. Imagine you were living in a world where the concepts of freedom and sovereignty were not clearly understood. Maybe this is because there have been in place for millennia insidious systems designed to weaken the will and resolve of the people. Maybe there has been an illusion of freedom with subtle restrictions which become slowly more oppressive over time. Maybe there have been structures leading towards slavery and the noose tightening to more stringent, abject slavery with any avenues of escape being slowly restricted. Maybe this world is filled with restrictive systems so complex that most people don’t even attempt to comprehend it very well. Whatever. It’s your imaginary world that I’m describing. You can picture it in any way that works for you. 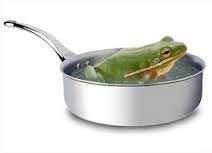 Here’s a little aside which may be helpful. It a bizarre phenomenon which we witness. If you put a frog in a shallow pot of hot water, the frog will jump out. If, however, you put a frog into a shallow pot of comfortably warm water, the frog will be happy to stay even though it could jump out. If you slowly heat that pot of water, the frog will be happy to stay as long as there is no moment when the water suddenly gets much hotter. The frog will stay there until the water boils and the frog is cooked to death because the frog never saw any moment when there was a dramatic change. This phenomenon of a frog in heating water is often used to describe how people behave in many situations, and how behavior can be manipulated and controlled.

Imagine you’re in a world where your freedom is slowly being taken from you, by whom you cannot quite pinpoint, and the process of enslavement is too slow to be easily noticed, similar to the frog in the heating water. I’ll describe this imaginary world from a financial perspective because money is associated in most people’s minds in this modern world as being a primary controller. Indeed, I define one’s wealth as one’s freedom (link). I define money as a form of wealth storage. (link) My description of this imaginary world is like this. There are financial systems which are designed to be deceptive. These systems contain structures so complex that you have difficulty when you try to comprehend them. Nonetheless, the financial systems are stealing most of the labor of lifetimes of many people, leaving them with very little to show for a lifetime of work. This is achieved by trickery. For example, money is invented as a storage of wealth. But, money is created by the designers of a system so that the system can slowly take money from you and transfer it to the few who designed the system. Then, currency is created and conflated with money. More complex systems overlay the whole thing to ensnare you more and more. If the current financial paradigm is intended to be deceptive, one part of the deception would be the creation of fiat currency debt rather than sovereign money as well as the conflation of the two.

What one sees will depend on the viewpoint, the point from which one is viewing, the perspective. Viewing from a body, 3D physical perspective, I see slavery and the noose tightening to more stringent, abject slavery. Viewing for a different perspective (I’ll call it a spiritual perspective), I see free will prevailing, triumph to the only space which has true power, the heart center.