The Christ Seed is a sacred oil. This oil was named Christos by the Greeks. According to the Wikipedia entry for Christ, “The word Christ (or similar spellings) … is derived from the Greek word Χριστός, Christós (transcribed in Latin as Christus)… Christós in classical Greek usage could mean covered in oil, or anointed, and is thus a literal translation of messiah.” According to the Wikipedia entry for Messiah, “A messiah (literally, “anointed one”)[1] is a saviour or liberator of a group of people.” This Wikipedia entry references the online etymology dictionary, which says

c. 1300, Messias, from Late Latin Messias, from Greek Messias, from Aramaic meshiha and Hebrew mashiah “the anointed” (of the Lord), from mashah “anoint.” This is the word rendered in Septuagint as Greek Khristos (see Christ). In Old Testament prophetic writing, it was used of an expected deliverer of the Jewish nation. The modern English form represents an attempt to make the word look more Hebrew, and dates from the Geneva Bible (1560). Transferred sense of “an expected liberator or savior of a captive people” is attested from 1660s.

title given to Jesus of Nazareth, Old English crist (by 830, perhaps 675), from Latin Christus, from Greek khristos “the anointed” (translation of Hebrew mashiah; see messiah), noun use of verbal adjective of khriein “to rub, anoint” (see chrism). The Latin term drove out Old English Hæland “healer, savior,” as the preferred descriptive term for Jesus.

A title, treated as a proper name in Old English, but not regularly capitalized until 17c. Pronunciation with long -i- is result of Irish missionary work in England, 7c.-8c. The ch- form, regular since c. 1500 in English, was rare before. Capitalization of the word begins 14c. but is not fixed until 17c. The 17c. mystical sect of the Familists edged it toward a verb with Christed “made one with Christ.” 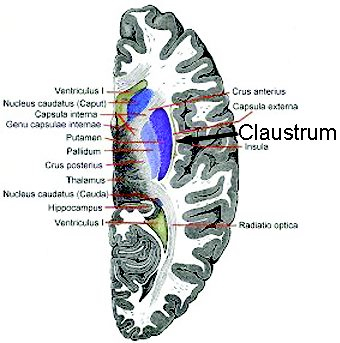 This sacred oil is secreted monthly by the claustrum. The claustrum is a structure located in the center of the cerebrum.